The Dalyan Delta, with a long, golden sandy beach at its mouth, is a nature conservation area and a refuge for rare loggerhead sea turtles (Caretta Caretta) and blue crabs. It is also a center for sailing and diving, possessing two major and several smaller marinas. It is a popular wintering location for hundreds of cruising boaters, being also served by the nearby Dalaman Airport. It is not known for certain when Marmaris was founded. However, Marmaris previously known as Physkos, was part of the Carian Empire in the 6th century BC before she was overrun by the Lydians. Another invasion by the Lydians in 334 BC led to the partition of the Roman Empire ruled by Alexander the Great. The town of Marmaris is located at the meeting place of the Aegean Sea and the Mediterranean Sea. Marmaris is one of the largest natural harbors in the world surrounded by pine-clad hills. Situated in the southwest of Turkey, in Mugla province, Marmaris is one of Turkey’s biggest holiday resorts. To the north lies the Gulf of Gökova; to the south, the Mediterranean. Datca Peninsula falls to the western side and to the east is the Lake of Köycegiz. 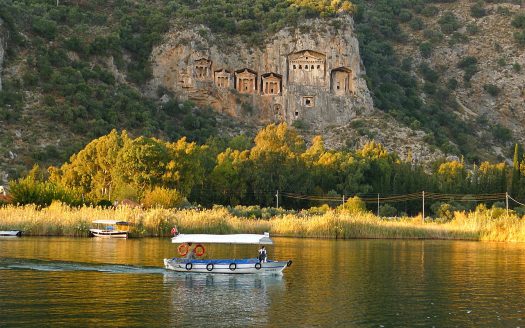