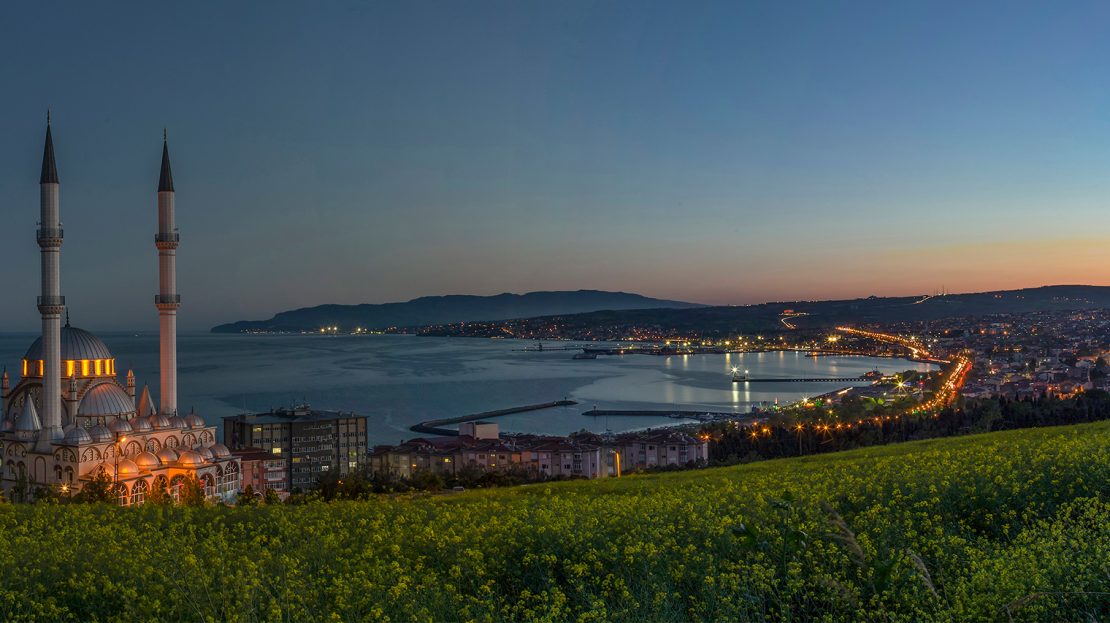 Tekirdağ see also its other names) is a city in Turkey. It is located on the north coast of the Sea of Marmara, in the region of East Thrace. In 2019 the city’s population was 204,001.
Tekirdağ town is a commercial center with a harbor for agricultural products (the harbor is being expanded to accommodate a new rail link to the main freight line through Thrace). It is also home to Martas and the BOTAŞ Terminal, both of them important for trade activities in the Marmara Region. The town’s best-known product remains Tekirdağ rakı although it is also known for its cherries, celebrated with a festival every June.
The proximity of the Greek and Bulgarian borders means that there are honorary consulates for both countries in Tekirdağ town.
Ferries from Tekirdağ sail to the nearby Marmara Islands during the summer.
The nearest airport is Tekirdağ – Çorlu Airport (TEQ) although there are many more flights to Istanbul International Airport (IST).

Names and etymology
Süleymanpaşa park, Tekirdağ
See also: Names of Tekirdağ in different languages
Tekirdağ was called Bisanthe or Bysanthe and also Rhaedestus (Ῥαιδεστός) in classical antiquity. The latter name was used until the Byzantine era and transformed into Rodosçuk after it fell to the Ottomans in the 14th century (in western languages it is usually rendered as Rodosto). After the 18th century, it was called Tekfurdağı, based on the Turkish word tekfur, meaning “Byzantine lord”. In time, the name mutated into the Turkish Tekirdağ, and this became the official name of the Turkish Republic. The historical name “Rhaedestos” (transcribed also as Raidestos) is still used in the Greek Orthodox ecclesiastical context (e.g. the Bishop of Raidestos, the Metropolitanate of Heraclea, and Raidestos).

History
The history of the city of Tekirdağ dates back to around 4000 BC. In Xenophon’s Anabasis, it is mentioned as part of the kingdom of the Thracian king Seuthes. It is also mentioned as Bisanthe by Herodotus (VII, 137). The city was a Samian colony.
Procopius chronicled the town’s restoration by Justinian I in the 6th century AD. In 813 and again in 1206, after the Battle of Rodosto, it was sacked by the Bulgarians, but it continued to appear as a place of considerable importance in later Byzantine times. The 11th-century Byzantine historian Michael Attaleiates owned property in Raidestos which he described in his will. From 1204 to 1235 the town was ruled by the Venetians following the Latin occupation of Constantinople during the Fourth Crusade.
In the Ottoman period, the city was successively a part of the Rumelia Eyalet, then of the Province of the Kapudan Pasha, the Silistra Eyalet, and Edirne Vilayet. After 1849 it became the seat of the Sanjak of Tekfürtaği.

Twentieth century
Tekirdağ was occupied twice by the Russian army: firstly, on 22 August 1829 during Russo-Turkish War (1828-1829) and then on 1 February 1878 during the Russo-Turkish War (1877-1878). After these wars, the city returned to Ottoman rule.
In 1905, the city had a population of about 35,000, of whom about half were Greeks.
In 1912, after their defeat at the Battle of Lule Burgas, the retreating Turkish army set fires to several parts of the town and massacred many Christians. After this, Tekirdağ was occupied by the Bulgarian army on 11 November 1912. The city was liberated on 13 July 1913.
Finally, Tekirdağ was occupied by the Greek army on 20 July 1920 during the Turkish War of Independence (1919-1922). After the signing of the Armistice of Mudanya, the city was given back to Turkey on 13 November 1922. Under the terms of the 1923 agreement for the Exchange of Greek Orthodox and Muslim Populations between the two countries, the Greek Christians of Tekirdağ were all forced to leave, their place taken by Muslim Turks from Greece.
In December 1934, a convoy of 1,583 Turkish-speaking Muslims from Dobruja and Ada Kaleh settled in Tekirdağ.
For many years Tekirdağ served as a depot for the produce of Edirne province. However, its trade suffered badly when Alexandroupolis became the terminus of the railway up the river Maritsa.